Own The Justice League-inspired Kia Sorento

Did you know, for the past 10 months, Kia Motors America has joined forces with comic-book publisher DC Entertainment to create a fleet of custom Justice League Super Hero-inspired vehicles that have been unveiled at auto shows and comic book conventions around the country. These fantastical Kias – Superman Optima Hybrid, Batman Optima SXL, Aquaman Rio5, The Flash Forte Koup, Wonder Woman Sportage, Green Lantern Soul and Cyborg Forte5 -- have captured the imagination of fans everywhere while raising awareness for Kia and our support of “We Can Be Heroes,” DC Entertainment’s giving campaign to fight the hunger crisis in the Horn of Africa.

As a finale to this enormously successful program, the eighth and final vehicle, a Justice League-inspired Kia Sorento, was unveiled to the press at San Diego Comic Con on Wednesday. This highly collectible and fully-drivable Kia features custom artwork by legendary comic book artist, Jim Lee, and will be auctioned online with all proceeds going to the “We Can Be Heroes” charity. 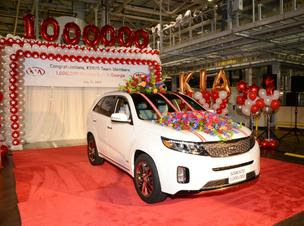 The one millionth Kia produced at the South Korean automaker’s plant in West Point rolled off the assembly line last week, the company said.

The vehicle was a snow white pearl 2014 Sorento SXL, Kia said. The company began operations at the plant in November 2009 after investing $1 billion to produce the Sorento CUV. The plant, called Kia Motors Manufacturing Georgia, was expanded last year with an additional $100 million investment, and it added the Optima sedan to production.
The Troup County plant, about 45 minutes southwest of Atlanta, has a capacity for manufacturing 360,000 vehicles each year.

Kia said its first North American plant employs more than 3,000 but is responsible for creating more than 11,000 jobs in the area when related jobs such as suppliers are taken into consideration.

Despite the milestone, the company said the one millionth vehicle will end up on a lot like others before it at one of Kia’s more than 765 dealerships nationwide

source
Posted by Hyundai Dealer at 1:32 PM No comments: